5 BOOKS YOU SHOULD CONSIDER READING 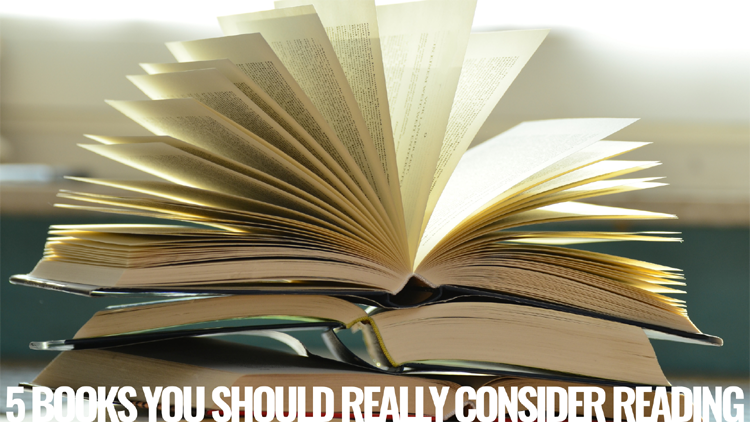 I've been reading and enjoying books since I first picked up Where the Wild Things are by Maurice Sendak back in Preschool.

And since that was . . . well, a great long time ago, I feel like I'm an amazingly well-read person. I'm not, but facts don't often interfere in how I feel.
As a matter of fact, I feel that I'm so darn well-read that I thought that I would put together a list of the five books that I feel everyone should read at least once in their lives. Or at the very least, give them some consideration.

But of course, since the facts to often like to rear their ugly heads now and again, and so since I'm not really all that well read, this is more like a list of super cool books. Stories that made me feel like I was someplace else and helped me escape and forget the troubles of the world around me.

I'd like to add that I'm listing single books, not a series of books. Those will be on their own list to come soon.

So here you go, in no particular order, 5 books you need to read . . . if you haven't already.

WHERE THE WILD THINGS ARE BY MAURICE SENDAK 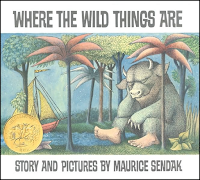 One evening Max dons a wolf costume and causes all sorts of mischief throughout the house. As punishment, Max’s mom sends him to bed without supper. As he lies in bed, the room around him transforms into another world.

There is a boat nearby and so Max sets sail. He finds himself in the land of the Wild Things, fierce monsters who make Max their king. There's also a Wild Rumpus which I always wanted to be a part of.
It’s not long though before Max is homesick and he must leave the Wild Things. So he sails back to his room, to find his supper waiting for him . . . and it’s still warm.

This is the book that put me on the path to reading. I didn’t learn to read on this book. If I recall correctly, the books I learned to read on were the Berenstain Bears. While my memory has always been fuzzy, I do recall my older brother teaching me to read and I’m pretty darn sure that the Berenstain Bears were involved.

So while the Berenstain Bears may have taught me how to read, Where the Wild Things Are taught me to love reading.

I wanted to be Max. I wanted to go to the land of the Wild Things, be their king, and join in on the Wild Rumpus.

Where the Wild Things Are was a great escape for me as a kid. I didn’t really have anything to escape from, but I sure did enjoy the escaping.

HITCHHIKER'S GUIDE TO THE GALAXY BY DOUGLAS ADAMS

Arthur wakes one morning to find his home is about to be destroyed to make way for a bypass. So, still in his bathrobe, Arthur decides to have a bit of a lie down in front of the bulldozer that is, as I said, about to destroy his home.

Then, to make his morning even more confusing, Arthur’s friend, Ford Prefect shows up, talks the workers out of destroying Arthur’s home, takes Arthur (still in his bathrobe) to the local pub for a pint, tells Arthur that he (Ford) is actually an alien, and then explains that the Earth is about to be destroyed to make way for a new hyperspace bypass.

Soon a fleet of Vogon Destructor ships arrive and they blow up the Earth.

Luckily, Arthur and Ford survive by hitching a ride on one of the Vogon ships, but without the Vogon’s knowledge.

And that’s just how the book starts.

There’s all kinds of wacky stuff happening in this book. You’ve got Zaphod Beeblebox, the Galactic President who steals the Heart of Gold, the only ship in the galaxy with an Improbability Drive. With him is Trillian, or Tricia McMillan, who's not just the only other survivor from Earth but is also someone Arthur had previously met at a party. You have Marvin, a very depressed robot. And you learn the secret behind Earth and how white mice are connected.

Plus, you’ll never look at the number 42 the same way again.

Hitchhiker’s Guide to the Galaxy is a lot of fun. It was the first book I read that made me laugh out loud, and I read it at least once every two years. Other than the story and the characters, what I love most about this book is the style in which Douglas Adams writes. I love the way the man constructs a sentence. He’s a huge influence on me and my writing.

Augustus McCrae and Woodrow F. Call are two of the most famous Texas Rangers in history as well as the best of friends. They are retired and living in the small town of Lonesome Dove, Texas when an old friend and fellow former Texas Ranger, Jake Spoon, arrives with tales of Montana and how a man could get rich if he were to drive a herd of cattle north and start themselves a cattle ranch.

It's not long before both Woodrow and Agustus decide to do just that. Woodrow’s reasoning is simple, he just needs the adventure and something to do. Augustus, or Gus, has different plans. The only reason he’s going along is for one last chance to see Clara, his once true love who is living in Nebraska.

Along the way they are beset by storms, Indians, bandits, and other such challenges.

This was the first western I ever read, and I’ve since found that I couldn’t have picked better. McMurtry has a way of writing dialogue that makes the characters feel real.

It’s been a long time since I’ve read the book, and I’m starting to think that maybe I’ll add it to my list of books to read this year.

THE HOBBIT BY J.R. TOLKIEN

This is a story about a hobbit. A hobbit who, like all hobbits, craves nothing more than a well cooked meal and a nice pipe. What hobbits don’t want in their life is adventure, and this hobbit, whose name is Bilbo, is no different.

But then the wizard Gandalf shows up at his front door with thirteen dwarves and the promise of adventure. The dwarves are on a quest to reclaim their ancestral home deep within the Lonely Mountain. But first they have to kick out the mountain's current occupant, the dragon Smaug.

Well, before old Bilbo knows it, he’s whisked off on the one thing in life he wanted the least . . . an adventure. And as it turns out, he quite liked it.

This was my first foray into the whole swords and sorcery genre, a genre that for the longest time was really the only type of book I read.

From here my reading world had opened up and I ventured forth into The Lord of the Rings, the Dragonlance Chronicles, the Shannara books, and The Wheel of Time.
And it all started in a hole in the ground.

THE STAND BY STEPHEN KING

Somewhere in the California desert, in a secure military facility, a virus is accidentally let loose upon the world. A virus that sweeps across the planet and kills practically everyone it infects.

In America there are two groups of survivors. Those gathered together by Mother Abigail, and those by Randal Flagg.

Mother Abigail is 108 years old and lives in Hemingford Home, Nebraska. Soon after the virus devastates the country, certain survivors begin to dream about her and journey cross country to get to her. Mother Abigail and the other survivors who find her, set up a community in Boulder, Colorado. But they know that their existence won’t be easy. In order to live free and in peace, they must first do something about Randall Flagg and his followers.

Randall Flagg. The Dark Man. The Walking Dude. He is known by many names, and he is the personification of evil. His goal is to eradicate humanity, and he’s gathered a group of people in Las Vegas with plans to do just that.

The Stand features a large cast of characters, but not too large that you can’t keep track of everyone. Stephen King weaves their stories masterfully, bringing them together by the end.

This is the book that made me fall for Post Apocalyptic Survivor stories. Plus, it’s one of Stephen King’s best. If you’ve not read any Stephen King, this is a good place to start.

The problem with this list is that my memory just ain't what it used to be.

What I've listed here are the five books that immediately spring to mind when I think of the books I love.

I'm sure once this has been posted for a few days, another few books will pop into my head and I'll then curse myself for not including them on the list. So don't be surprised if a few months down the road you see a new post entitled 5 More Books You Should Consider Reading.
By Steeven R. Orr on 6/08/2021 04:00:00 AM