In February of 1987, following the Crisis that would forever change the landscape of the DCU, three men were brought together to tell the tales of the Justice League for this new, Post-Crisis Universe.
But there was a problem. Characters such as Superman, Wonder Woman, Green Lantern, and the Flash were going through their own Post Crisis Reboots at the time, and the creatives in charge of redefining these characters were more than a little reluctant to allow others to tell stories about their babies, stories that might contradict what they were trying to build in each of their own books.
And so a new team was chosen. A team that, on paper, should never have worked, should never have sold, and should never have become the run away hit that it certainly came to be.
Hailed by many as the "Bwa-ha-ha!" era of the Justice League, I'm going to take a look at the series, one issue at a time, to rediscover what it was that I loved about the book, and to dispel the idea that the series was nothing more than B-List characters, foolishness, and a constant barrage of Bwa-ha-ha!
This is the episode in which I'm talking about Justice League #1 by Keith Giffen, J. Mark DeMatteis, Kevin Maguire, Terry Austin, Bob Lappan, and Gene D'Angelo.
Justice League #1 was published by DC Comics and was published on February 5, 1987.
FIND THE EPISODE NOW ON ANY OF THE FOLLOWING SERVICES: 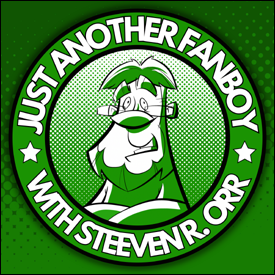